100% Perception: DCDs and our International Image


The recent food safety controversies involving Fonterra have highlighted the critically important interdependence between NZ’s exporters and our international brand. Further controversy surrounding DCD traces followed by a botulism scare were linked with river water quality in a wide ranging attack by the UK’s Daily Mail, alleging our ‘100% Pure’ slogan was “pure manure”. Whilst some have claimed the 100% Pure line should be taken with a grain of salt, export bans put in place by unaffected countries demonstrates the serious consequences of mishandled communications.

In the past month, bans and suspensions of Fonterra’s products have variously occurred in Russia, Sri Lanka and most recently Bangladesh. Particularly unsettling is Sri Lanka’s focus on DCD residues and Bangladesh’s related “nitrate in the milk powder” concerns.

Regardless of the (disputed) extent to which DCD residues have been detected, it is absolutely essential that we effectively communicate with our trading partners to avoid our brand being unnecessarily tarnished. Although DCD is non-toxic and presents no food-safety risk, many international markets have little to no tolerance of any level of chemical residue in their food - there is no international standard prescribing an acceptable level of DCD.

But why are we using DCD in the first place? DCD (technically ‘Dicyandiamide’) is one of the most promising technologies available for reducing the environmental impact of agriculture - it is the only product recognised under New Zealand’s National Agriculture Greenhouse Gas Inventory as a mitigation tool. This, and its additional effect of reducing the level of Nitrate leaching into our waterways, makes its usage very compelling, from an environmental perspective. 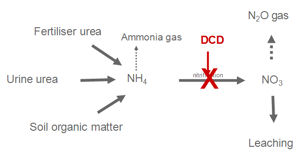 Approximately half of NZ’s emissions relate to agriculture and of these, 20% are related to livestock emissions from nitrous oxide and a further 6% from Nitrogen-heavy fertilisers. Motu and Landcare Research studies have shown that regulating nutrient run-off in water catchments or GHG emissions will generally lead to improvements in both; this is largely driven by changes in land use but also on-farm management decisions. Other, pre-experimental modelling under the Pastoral 21 programme has suggested it may be technically feasible to enact a 30% reduction in N leaching using current technologies even with a 20% increase in production. This suggests that significant nitrous oxide reductions may also be possible.

But do the economics stack up? Since agriculture is not included in the emissions trading scheme, farmers cannot use DCD to directly benefit from the reduction in CO2-e emissions. Positively though, DCD usage can in some circumstances boost pasture production by 5-10% but most studies suggest that its use will still come at a cost to profitability. DairyNZ work suggests that 20% reductions in leaching may be possible on dairy farms in Canterbury, while maintaining farm profitability.

Technological advances in agriculture represent a huge opportunity to increase the sustainability of our farming systems, without compromising food safety. It is essential that we pre-emptively address the potential concerns of our trade partners so as to enhance, rather than jeopardise our clean, green reputation.
Posted by Unknown at 12:19

Comments will be moderated by the author of the post. Bad language or personal attacks will not be published.

This blog has been set up as a forum for discussing agriculture and greenhouse gas emissions, with a New Zealand focus. Contributors from a variety of relevant backgrounds - farming, industry, public policy, and science - and will post regularly on a broad range of topics relevant to agricultural emissions.
See the About page for background on the blog, and check out the Links page for more info.
You can also find us on:
Kiwiology – A Directory of New Zealand Blogs